This project involved the interior and exterior restoration of the Old Steuben County Jail. The building was constructed in 1878 and included a jail, sheriff’s office, and sheriff’s residence. In 1976, the building was listed on the National Registry of Historic Places and served as a jail up until 1992 when the jail was finally closed. The restored building now serves as a historical museum and visitor center.

The project included removing features and finishes which altered the building’s historic character. The building was restored to its original condition as closely as possible. This included the reconstruction of the front steps, porch, and entrance canopy. In addition, the original windows, plaster surfaces, wood moldings, metal trim, and interior finishes were restored. A new heating and air conditioning system was installed as well as light fixtures representative of the era. The project also addressed the issue of accessibility and included a new handicapped accessible toilet room, exterior lift, and interior lift. 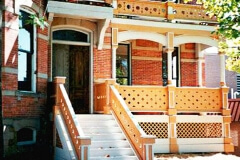