This was our second project for WBNI. We designed the original studios and offices for this station when it first broke away from IPFW and became public in the early 1980’s. As the station’s appeal grew, the two studios and 1,500 square feet of leased office space on the YWCA campus were no longer able to accommodate their needs.

We worked with the WBNI site selection committee for several weeks visiting numerous sites and existing buildings that could potentially serve the needs of the growing station. When it was determined that the current site on Clairmont Court could accommodate the studios, offices, and a new tower and transmitter, the site soon became the favorite.

The new 6,000 square foot building was designed to accommodate the transmitter and other needs of the station. One of the unique features of this project is the heat recovery system. Heat produced by the transformer is used to heat the studio. In addition, WBNI’s new home includes some new features that will enhance local programming. These include a special studio equipped with a grand piano used to broadcast and record small vocal and instrumental groups and state-of-the-art equipment enabling WBNI announcers to conduct live telephone interviews from the studio. Edward Welling, Project Manager, worked with an acoustical engineer to ensure that the specific soundproofing requirements for the studios would be met. 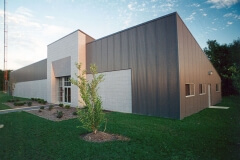