Lack of gathering space was the catalyst for this addition. The existing church had two entries, but neither included any gathering space for before- and after-service socialization. The two entrances also seemed to encourage separation rather than unity of the congregation. While many schemes were explored, the final scheme provided a large gathering area that would connect the two entries. This space would not only be used for gathering before and after services, but could also be used for church meetings and funeral viewings.

The addition also provided handicap accessible features that the existing church was lacking. Adjusting the grading on the exterior of the church allowed the sanctuary level to be wheelchair accessible. In addition, a new handicap accessible restroom was provided adjacent to the new gathering hall.

Special care was taken to ensure the new addition would blend well with the historic nature of the existing facility. This need was especially important since the addition would encompass the entire front of the church. Brick and limestone detailing as well as gothic-arched windows were incorporated into the design. Roof heights and angles were carefully considered to ensure that the existing building was still visible, particularly the beautiful steeple. The stained glass windows in the original front wall of the church were moved into new thermally broken aluminum window frames in the new front wall. 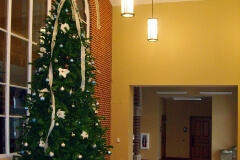 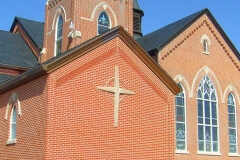 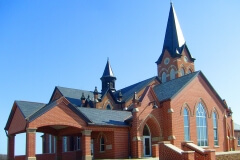