Engine House No. 5 was built in 1893 in a Queen Anne/Romanesque-influenced style. It was utilized by the fire department as an engine house into the 1960s. In 2004, the local firefighters’ union purchased the building with the intent to use it as their local headquarters.

The building’s structure was sound, but years of neglect had left much of the building dilapidated. The interior boasted exposed wiring, holes in concrete, and numerous dirt piles. The exterior included several boarded windows.

Grinsfelder Associates assisted the union by planning a renovation that would convert the first floor into meeting space and the second floor into offices. Where possible, the existing brick walls were left exposed on the interior of the building to showcase the building’s history. New plumbing, electric, and heating and air-conditioning systems were installed. New windows and doors were also installed throughout the facility, including a pair of historically accurate garage doors.

In addition to serving the local union, the renovation of this historical facility near downtown Fort Wayne has also helped to spur additional revitalization efforts in the area. 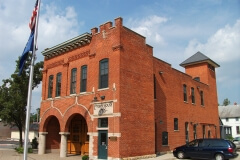 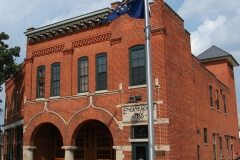 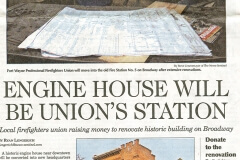 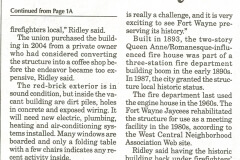