Lack of space for surgical procedures, the housing of animals, and new medical equipment provided the catalyst for the doctors at the Northeast Indiana Veterinary & Emergency Specialty Hospital (NIVES) to embark on an extensive facility addition that would nearly double the amount of usable space in the building. The first floor addition consists of new operating rooms, operatory preparation space, and space for a new C.T. unit and a future MRI unit. The second floor of the addition houses a large meeting and education space.

A cramped site made the prospect of adding floor space challenging. The only viable space on the site for an addition was at the front of the building. However, furthering the difficulty was the unique geometry of the building, which consisted of intersecting shed roof forms. The solution resulted in the extension of two of the existing roof forms and the addition of new shed roof forms. In addition to providing cover for the new addition, this solution also created a colonnade-like procession to the entry, which had previously been both understated and somewhat difficult to find. 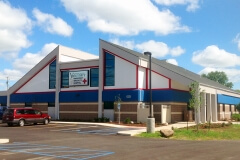